See how COVID-19 may affect you.

​For more than 100 years the Abbotsford Convent, provided shelter, food, education and work for tens of thousands of women and children who experienced poverty, neglect and social disadvantage.

Run by the Sisters of the Good Shepherd from 1863 to 1974, the Convent’s harsh conditions and hours of long work offered few comforts but provided shelter for desperate women and girls through the great Depression, two World Wars and other social upheavals.

Abbotsford Convent shows the role of religious and charitable institutions in Australia’s social and welfare history during the 19th and 20th centuries. The Convent’s asylum laundry is a rare surviving example of its type within Australia, reflecting the social attitudes of the time. 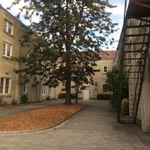 The Order of the Good Shepherd

The Sisters of the Good Shepherd were founded in France in 1835 to assist women and children in most need. Four nuns from the Order arrived in Melbourne in 1863.

Established in one of the then poorest districts of Melbourne, by 1900 the Abbotsford Convent had become the largest charitable institution operating in the southern hemisphere. It was one of the largest Catholic complexes in Australia and at its peak more than 1000 women and children lived within its walls. It also housed a number of older residents who had been at the Convent since childhood.

Unlike similar institutions in Ireland and the United Kingdom, single pregnant women were not knowingly sent to the Abbotsford Convent and women did not have to be Catholic to be placed there.

Income to buy what could not be grown or made on-site was generated through lace-making and commercial laundry services. The Convent also included vegetable and fruit gardens, dairy and poultry farms and a piggery.

The nuns shared the stark conditions of the inmates, such as bland food, hard work, confinement and the long periods of silence.

From the 1890s to the 1960s most Australian capitals had a large convent offering commercial laundry services of women placed in the convent, voluntarily or involuntarily, for being unwanted, neglected, suffering from some disability, destitute, uncontrollable, or for being ‘wayward’. Many were orphans, wards of the state and girls considered by the state or the Church to be in ‘moral danger’.

Some girls were also referred to the Convent through court orders which drew the Convent into the juvenile justice system to provide some form of reformation. Girls and women confined in the Convent were expected to change their behaviour and develop a different life by learning domestic skills from the Sisters.

Laundry work was regarded as suitable as it did not need much training and made money without great capital expense. As one nun stated in 1890, the physically exhausting work was "calculated to occupy the mind and body, leaving little time for melancholy reflection on the past or anything except the work of reformation". However women’s lives were largely restricted to the Convent with few opportunities for outside work.

The Abbotsford Convent’s laundries serviced many organisations, including Melbourne hotels, other Catholic institutions, government agencies, visiting ships and wealthy Catholic families. The women did not earn money and it was not until the 1960s that some younger women had access to the basic education available to orphans, boarders and other girls on site.

The women’s free labour meant that the Sisters could charge considerably less than their competitors and this income provided basic food and shelter to the residents of the Convent. The work was not just limited to the women seeking help, the Sisters themselves spent most of their adult years working in the laundries without pay.

The Convent laundry and asylum buildings are an important physical record for those Australians and their families known as the Stolen Generation and the Forgotten Australians. Their experiences were acknowledged in the national Apology to Australia's Indigenous Peoples in 2008 and to the Forgotten Australians and Former Child Migrants in 2009. The harm of institutionalisation and the trauma often experienced by residents is acknowledged as being part of the Convent’s heritage.

The Sisters operated the Convent until 1974, selling the site to the Victorian state government. La Trobe University operated the site from 1989.

In 1997 a small group formed in opposition to a planned property development at the site. A community campaign fought for seven years to transform the site into an arts, educational, cultural and tourist precinct for the community.

Today most of the former Abbotsford Convent, with its 11 historic buildings and gardens, is a large multi-arts precinct. Run as a not-for-profit organisation, the majority of the former Convent houses over 100 studios, two galleries, cafes, a radio station, a school, and green open spaces in the heart of a bustling urban environment.

The nearby Good Shepherd Chapel continues to be managed by the Sisters of the Good Shepherd and the adjoining river frontage is the Collingwood Children’s Farm, also a not-for-profit organisation offering a farm experience for children.